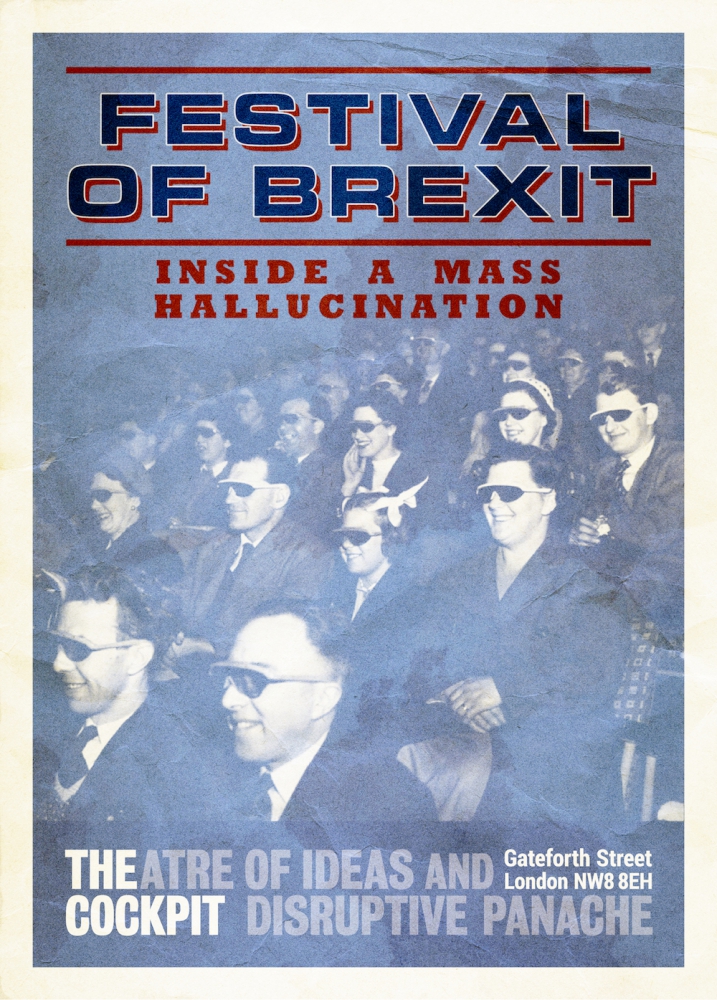 Inside A Mass Hallucination

Special invitation on Brexit day/Halloween. A day also the aniversary of the death of the great escapologist - Harry Houdini.
The Cockpit is pleased to invite you to a special late night performance of The Last Act Of Harry Houdini written and performed by Barry Killerby.
9.30 pm on Thursday 31st October 2019.

An opportunity to celebrate - or not - whatever will be happening - or not, on That Very Special Day.

A day when the the veil between the real and the unreal is at its thinnest but also a day when another of the worlds great illusionists
finally came unstuck through provoking others to attack him in order that he might access his inner hero.
(On this day in 1926 Houdini died after challenging someone to punch him in the stomach.)

All ticket holders to the late  performance of the show (which otherwise is all to do with Harry Houdini and nothing at all to do with Brexit or
the Dark Clown) will recieve a large, free glass of wine.
(Democratic binary choice only: you have to choose red or white. If more people choose red than white then everyone has to drink....oh forget it.)

So what Deal?  A No Deal, another Deal or even May's Deal.  Of course none of them are really deals;
just sets of unhappy holding arrangements while hugely expensive commisions at one level
and legions of weary opposite numbers at ever-lower levels across 27 countries work out what to do next.

Each one a milestone along the route to  Brexit becoming Our Lady of Lourdes or The Loch Ness Monster;
an industry as well as a figment of fevered imagination.

Or we'll get a delay.

But we'll be told the issue is The Deal.

But The Deal is a phantom.

Brexit implied a finality of which it was not capable.
Beyond the illusion of a once and for all vote on Europe lies a continuing national crisis of division and confusion,
of interminable international negotiations/renegotiations lasting years.
Exit is a noun but also a verb. Its something we are going to have to do. Over years. Just like joining was something we did over four decades.
And whatever materialises as the leaving unfolds, it will bear no relation to the imaginings of either today's Brexiteers, or Remainers.

The referendum promised to put an end to something.  But it could only ever start something.  There is no final deal. There will be no certainty.
The reality is change lasting a generation.
Dystopian nightmares or Utopian fantasies notwithstanding, the future is up for grabs.
We are going to have to rise to that challenge.

Fittingly, Festival Of Brexit is a random series of events rather than an actual festival.
Our first night on Monday 4th March  sated our desire for the subject to the extent that we never did any more.
Until now: when we would like to invite all those with the stomach for it to The Last Act Of Harry Houdini.
No passports required.

The Cockpit invites submissions for live performance, anything from 3 minutes to an hour duration, using any form for our Festival of Brexit. The theme:
inside a mass hallucination.

We will be doing more Festival of Brexit events in the future.
Watch this space, join the Facebook event and come for the show and a glass of wine (or even just the wine) on the 31st October -
before we wake up and find it's all over.

Please read the trigger paper, get triggered and email your proposal (No longer than half a page of A4 please) to dave

We will schedule events according to type/theme/length in collaboration with you. 50/50 split of net box office . No fees either way.