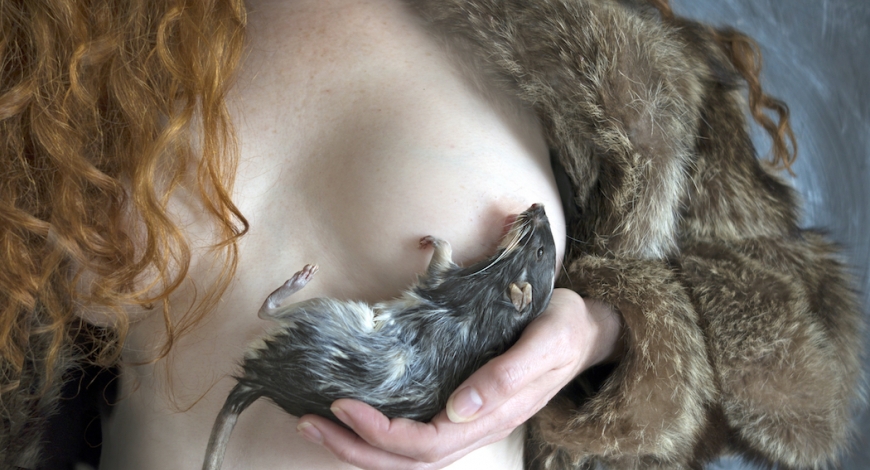 FREE LUNCH WITH THE STENCH WENCH

tickets/dates
This event is part of:
BEYOND BLOODLINES

Produced By The Cockpit As Part Of BEYOND BLOODLINES

A new solo show exploring the personal and shared experiences of growing up as one of the ‘feral underclass’ in relation to today’s ‘Austerity Britain’. Fleas, cheap clothes, thrifty bread, cold baths, and debauched disadvantaged dancing will be investigated as I chart the drive for survival and fitting in.

Charting the drive for survival and fitting in, the StenchWench shares stories of growing up as one of the ‘feral underclass’ whilst precariously existing in Austerity Britain today.

Cheap clothes, thrifty bread, cold baths, and debauched disadvantaged dancing are investigated as she natters and sings about how to get by and make do.

In a climate of Thatcher’s Britain and unemployment she chronicles her itinerate childhood in the 70’ and 80’s. Now, fully fledged she strives to overcome the humiliation of ‘lack’ and celebrates our spirit of community and hope at a time of even more disparity between the privileged and the hard-up.

Members of her family are embodied, showing aspects of household roles. She re-enacts conversations and investigates family and social history in an attempt to make sense of where shame developed. She scrutinizes the microcosm of how a family functions within English society, its values and what is considered acceptable or not.

Humour is an important driving force as the StenchWench conveys some of these familial ways.

Last year having fleas whilst hosting Laura from Munich through Airbnb was the initial trigger for exploring material for the piece.
The incident brought up all the familiar feelings of shame in relation to her domestic early days set up - this aspect of covering up and ‘not coming up to scratch’.

Stories and songs about how to get by and make do will be shared whilst attempts are made to overcome the shame of bareness and celebrate our spirit of community and hope.

Catherine creates a mixture of staged pieces and interactive one to one performances across a range of contexts, including the independent circuit and with prestigious partners:

She has created projects with Home Live Art for the last four years including for The National Theatre.

Recently she has made performances for The National Portrait Gallery, Festival of Love at The South Bank centre, with Dickie Beau, In Between Time Festival, Sprint Festival at CPT, Mayfest, Bristol Museum and Art Gallery, Latitude Festival, BAC, Bethnal Green working men’s club, BIOS in Athens, Buzzcut, Glasgow and Domestic II festival presented by Word of Warning in Manchester.

She performs internationally with Lundahl and Seitl, at The Wooran Foundation, Seoul, Korea, Noorederzon festival, Holland,
LIFT festival at The Royal Academy, London, Edinburgh Festival and Stuk in Belguim.

Her video TRAMP as part of duo Molly and Me was selected for the Re.act Feminism 2 archive tour of European galleries in 2014-15.

Free Lunch with the StenchWench is supported by Arts council England, The Bike Shed, Exeter and Stanley Halls, Croydon.