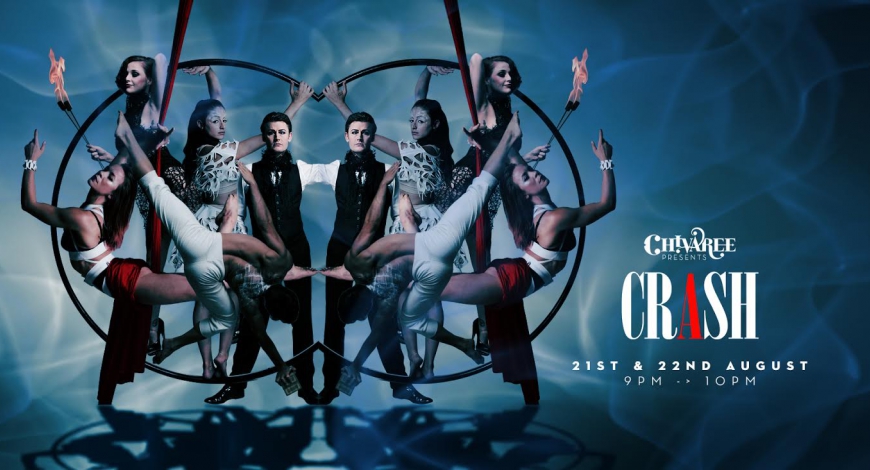 Produced and presented by Chivaree

Chivaree presents the world premiere of CRASH - A Celebration.

A kaleidoscope of London’s finest circus and physical performers, CRASH is a symphony of colliding, entwining bodies conducted by the living legend of London’s debauched, debonair cabaret underworld, Dusty Limits.

A story about the rollercoaster of life's trials, tribulations, joys and exultations; a celebration of human strength and individual fragility.

Featuring breath-taking aerial dance, intimate acrobatics, jaw-dropping fire performance, and and an array of circus artists of the highest ability CRASH is a raw poetic exploration of human feelings in their purest form.

With a cast of the most respected, revered and reclaimed of UK circus performers, including Jackie Le on aerial hoop, Rebecca Rennison on silks, Lily Raptor and her hula hoops, Lil Rice on cyr wheel and unleashing a voice like thunder dipped in honey, the acrobalance of Pete and Loric and the intoxicating, enthralling and downright dangerous fire of Snake Fervor.

Fresh from a critically acclaimed, sold out run at the Vaults, in Waterloo. Chivaree presents their new production. With a background including a Guinness World record, and a string of festival appearances and performances across the globe, Chivaree are set to bring their trademark flair back to London.

"Spellbinding"
This is Cabaret

"Raw, exciting and full of energy"
London Theatre One