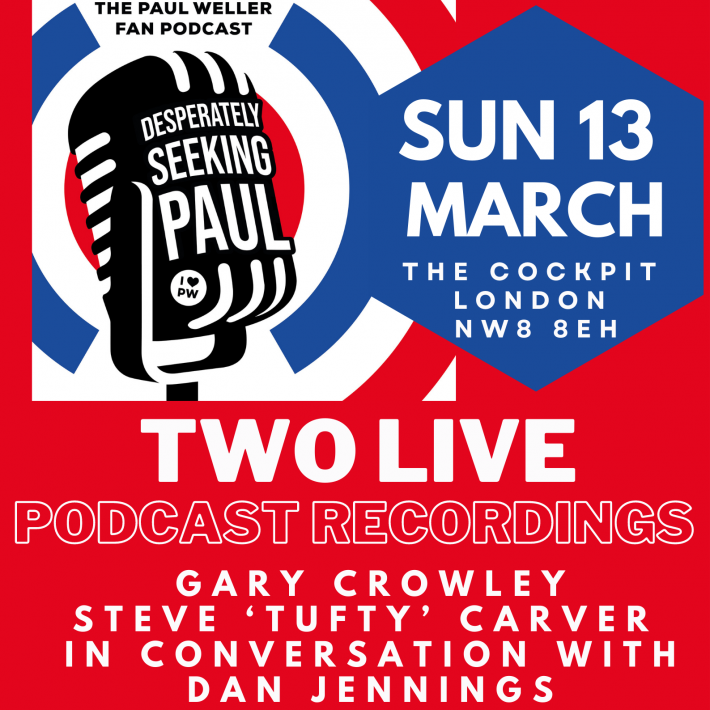 Produced and presented by SDD Productions

A recording of two very special episodes of the Paul Weller Fan Podcast.

Hosted by Dan Jennings –  A radio broadcaster who gave up a career with one big regret.Never getting to interview his hero, the legendary British musician Paul Weller.

This podcast exists purely to solve that issue.

A celebration from In The City to Fat Pop with everything in between. This event will host episodes with two Weller-loving legends.

Episode 88 – Steve ‘Tufty’ Carver
Woking born and bred, Steve has been friends with Paul Weller, Bruce Foxton, and Rick Buckler for over 45 years.
Known to everyone as Tufty - he calls himself ‘a friend, fan and eventually a "roadie" with The Jam’, and promises plenty of stories from watching "my mates going from playing gigs in Woking to Wembley, to the World".

Episode 89 – Gary Crowley
Gary Crowley's career in music began in the late 1970s when he founded the new-wave fanzine 'The Modern World' despite still being a schoolboy at the time.
When Gary was 15, he telephoned Paul Weller's Maybury home with the hope of securing an interview with The Jam star for his fanzine.
A highly-respected music fanatic, Gary has interviewed some the biggest names in music including Oasis, Elton John, Paul McCartney, Robert Plant, Supergrass, Radiohead, Manic Street Preachers, The Sex Pistols, The Clash…the list is endless!

Each episode will record for around an hour with a break in between for refreshments!