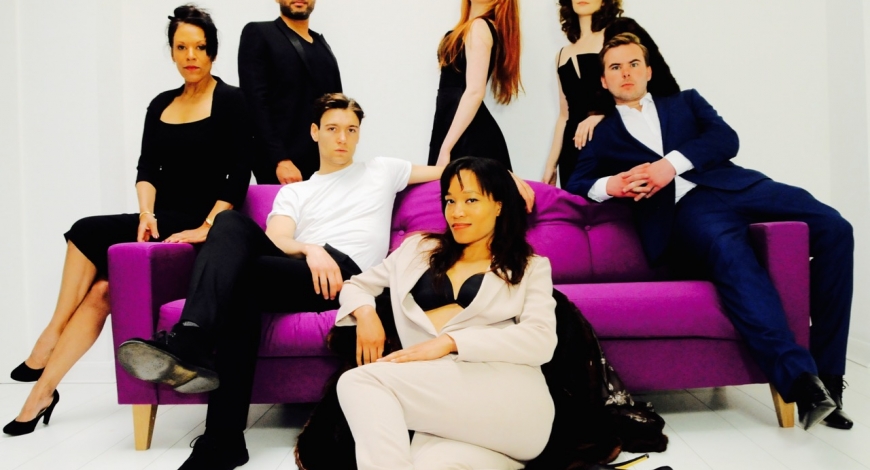 Contemporary Satire About The Modelling Industry

Produced and presented by Amazonia Music Theatre Company
Hosted by The Cockpit as part of Camden Fringe
ETHICAL PEOPLE
Ethical People by award-winning writer/director Jude Alderson, a scathing whirlwind comedy about the modelling and the movie industry: spotlight and darkness, satire and sadness, glitter and dirt, hope and despair.
With a cast of nine including a jazz trio.

Micky’s dreary lifestyle on a building site is transformed by a group of London weirdoes from an ad agency. He finds himself in the dreamlike world of beautiful women and expendable cash. He learns pretty fast that exploiting others gives him a helping hand to further success. Fixated on Jake: handsome, haunted and his modelling rival, Micky hits stellar heights ….before his downfall.

Maria is writing a movie ‘ everyone in London is from somewhere else’. She wants to claw her way out of the sexist modelling industry. Or does she?

Livvy is battling against the glass ceiling and always playing the ‘laid back party girl, the beige or café au lait or mix-it-up white teeth girl’.

Martha wants a baby – or at least a relationship with her ever frustrated and absent man who is obsessed with success.

Pedro wants everything that moves – and then some!

A cast of nine including a jazz trio with Debby Bishop as Lola.

MADONNA IN SLAG CITY
“Blazing abrasive and wonderful music, trailblazing in every
sense”… THE GUARDIAN