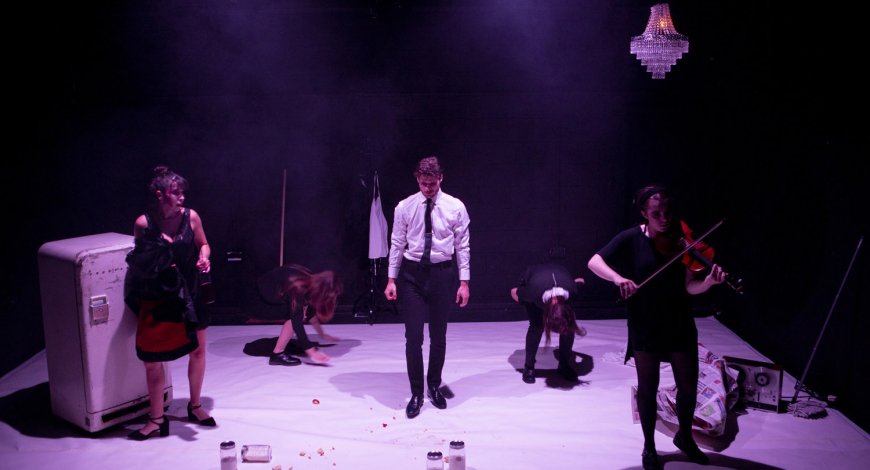 Kafka's reimagined tale in 360° ON DEMAND

tickets/dates
This event is part of:
Cockpit Broadcast
On Demand

Produced and presented by Collide Theatre

At a time when audiences cannot unite in a theatre, Collide Theatre joins forces with LIVR, the world’s first virtual reality content platform dedicated to theatre.

Watch Collide's dance-theatre version of Kafka's classic parable - straight from the first row of an auditorium!

Metamorphosis first opened in April 2019 at the West End (funded by the Arts Council England, and co-produced by the Tristan Bates and VOILA! Europe).
After sold-out performance and stellar reviews, Metamorphosis was selected by the Incoming Festival as "the best emerging theatre work in the UK."
In June 2019 the show transferred to both the New Diorama in London, and HOME in Manchester.

You can now watch Metamorphosis from the best seat in the house, without leaving the house!
The closest one can get to a digital experience of being in an auditorium!

In the course of one night a beloved son turns into a hated freak.​
But is he really different?
Is there really a reason for his family to be as appalled?
This is Gregor Samsa’s story.
It is also the story of anyone who has been made to feel as vermin.​

This new version addresses one of the biggest human fears: feeling like an outsider – or rather, being made to feel different, particularly by the people most close to you.

A chorus of five performers collectively, through storytelling, dance and music, bring to life the story of Gregor Samsa in a celebration of his uniqueness and the uniqueness of all those before and after him who had to fight against their family’s alienation.

★★★★ "This fresh interpretation of Kafka’s wretched, haunting tale propels it straight into the 21st Century where it belongs to be revisited yet again, and perhaps for centuries to come." (LondonTheatre1)

★★★★ "Part-drama and part-dance, Metamorphosis uses powerful visuals to create an unsettling and arresting experience. Metamorphosis is a fantastic show, presenting a fresh and original take on Kafka that will please both the knowledgeable and the curious." (PlaysTosee.com)

★★★★ "This staging of Metamorphosis is starkly original and works as a moving piece of storytelling. It's certainly provocative, engaging theatre." (The Panoptic)

"Collide Theatre have created Kafkaesque theatre through the ingenious use of perspective, a fantastic score and superb dance choreography. Metamorphosis is a provocative performance that is both thought-provoking and precisely executed." (ThePlaysTheThing)

Buy access to the video and watch at your convenience!
Please watch from a laptop or desktop PC in order to experience the VR recording by moving around the video with your cursor.

Tickets:
Ticket price: £6 (including a £1 ticketing fee)
Don't forget: Move around the video using your cursor - you can choose where to look - it's a 360° recording!