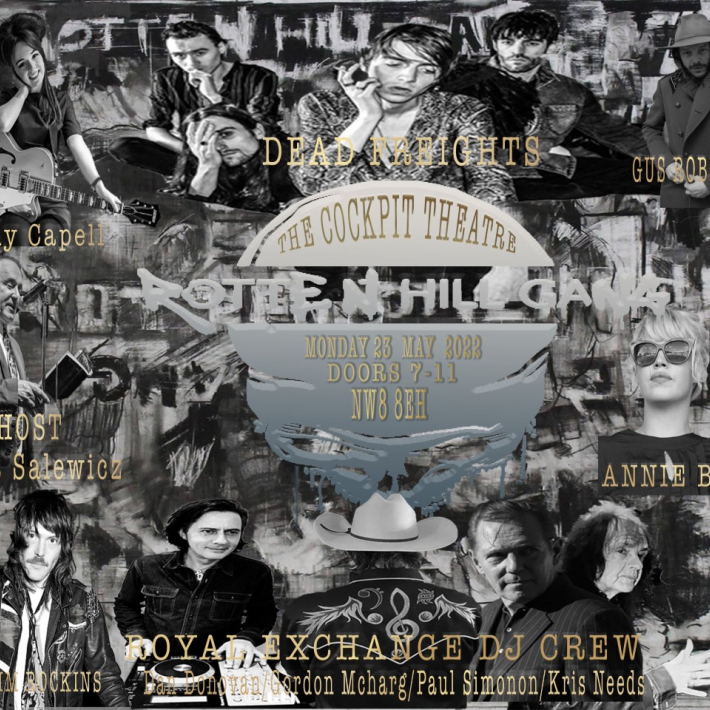 This event is part of:
In-House Productions
Produced and presented  By The Cockpit

MOSHPIT AT THE COCKPIT

Regular music nights curated by a series of music gurus.

We push back the seats to create nights to remember.

Next up:  ROTTEN HILL GANG & GUESTS

A night to blow the roof off!

Formed in a heartbeat within the cracks and back alley’s of Ladbroke Grove and Portobello; evolving over a lifetime from Powis Square to Times Square, Rotten Hill Gang are a perfect example of the ‘whole’ being greater than the sum of their parts.

This W11 based collective are renowned for their collaborations with an exciting flow of eclectic musicians, artists, poets and more; all organically thrown together in a studio, working to create clever, musical fusions of rap, funk, rock and reggae. They continuously cross and push boundaries, mixing and mashing up genres and styles, catching and capturing unforgettable moments that make the magic; recordings and film footage of the chaos has documented their journey and belief in music that it is an evolving, exciting voice to express.

Gothic poetry spat over disco Nirvana. Putting the ABBA in Black Sabbath. With dark humor and passion they confidently touch on personal struggles, external battles and explore those thoughts that keep us up in the early hours of the morning. Facing the complexities of today’s world, they push back from an overly sterilised generation of music.

The Freights stand out as one of the most exciting bands emerging from the UK, delivering real emotion and musicianship.

A journalist, broadcaster and novelist. He was senior features writer for the New Musical Express from 1975 to 1981, where under tutelage of editor Neil Spencer he and other journalists were said to have re-written the book on music journalism. The period Chris spent at NME is regarded by some as a Golden Age of Music Journalism, where, fuelled by the punk rock explosion, the whole genre changed into a complex revolutionary socioeconomic critique rather than the fan club–style journalism of the previous decades. Along with other NME alumni of that period, Chris's work soon found its way into serious mainstream publications the Sunday Times, the Independent, The Daily Telegraph, Conde Nast Traveller, Q, Mojo, Face and Time Out.

Salewicz's time at the NME helped him forge a unique relationship and friendship with Joe Strummer and Bob Marley. His journeys with these two men continued to redefine music journalism.

In 1995, he and film director Don Letts moved to Jamaica for two years to develop film ideas. Drawing on extensive research, Salewicz embarked on the writing of Third World Cop, the most successful film ever in the Caribbean when it was released in 1999.

Salewicz is the author of fifteen books, including the acclaimed Rude Boy: Once Upon a Time in Jamaica; Redemption Song: the Definitive Biography of Joe Strummer, and Bob Marley: The Untold Story.