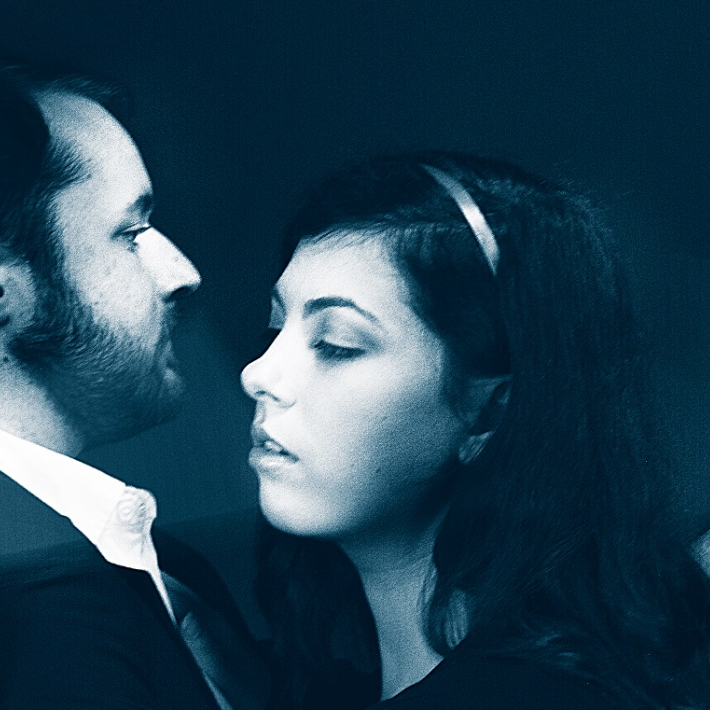 Produced and presented by Adaptivity Theatre Company, in collaboration with N2P
90 minutes - no interval
Audience members with Smart phones and Facebook accounts can access additional layers of the performance, if desired. Poster image inspired by Banksy's Mobile Lovers.

Doors will open 30 minutes before the start time of 8pm. Latecomers may not be admitted.

Joan Don and her half-brother, Pedro Don, have just returned from a six month deployment in Afghanistan. Ancient grudge has broken to new mutiny upon the recent death of their father, from whom Joan has been estranged since childhood. In response to his guilt-ridden father’s last request, Pedro is attempting to build a relationship with his half-sister Joan. Meanwhile, Pedro’s godfather, Mayor of London Leonato Elliott, tries to support his godson through this time of grief and reconciliation by inviting him and Joan, along with Pedro’s band of brothers from his platoon, Claudio and Benedick, to a welcome home celebration with his daughter Hero, niece Beatrice and sister Ursula, who is waiting to hear from her husband, Sean, who has been injured in Afghanistan.

An intriguing exploration of the connections between the turmoil caused by the events of this romantic tragicomedy and the evolution of social media. Frequent ‘noting’ of social media and technology is the root of some troubles that people experience in their relationships today, and is reflected in the obstacles between the characters in this play. During the English Renaissance, ‘noting’ (meaning rumour or overhearing) sounded very similar to ‘nothing’, used in the title of the play. It’s through noting that Benedick and Beatrice are tricked into professing their love for each other and by founding his belief on nothing, Claudio is tricked into refusing to marry Hero. This word play has inspired the unusual title for this production, Much Ado About Not(h)ing, the use of the parenthesis indicating that the ‘h’ in the word ‘nothing’ can be retained or deleted: noting or nothing.

Digital projection, movement and dance, as well as original music, written by Alex Loveless and Scott Howland, with lyrics sourced from Shakespeare’s text, combine to create a production that explores what 21st century society takes most note of: the people and events in the ‘mortal world’ or the ‘digital world’ that people access through their computer screens or mobile phones. Mobile devices are an integral element of the performance, inviting audience members to choose between viewing the performance presented by the actors onstage or the digital performance that they can access through Facebook on their mobile phones (or a little of both), thus actively immersing the audience in the dilemma this production endeavours to explore.

Kelly Wilson: Company founder and artistic director
Based in Australia, Adaptivity Theatre Company’s first production was an adaptation of William Shakespeare’s Much Ado About Nothing, which began its life as a directorial dissertation performance, awarded a high distinction at the Royal Academy of Dramatic Art in 2017. This adaptation retains the original Shakespearean text, while modifying some linguistic expressions, dramatic situations, and characters to reflect a contemporary, 21st century society. Taking inspiration from William Shakespeare, company founder and artistic director, Kelly Wilson, develops projects of an experimental nature, endeavouring to render the poetic language of classical texts more accessible to today’s highly visual, digital era audience by incorporating digital projection, movement and dance to represent visually elements of text, as well as music to heighten moments of emotional joy or turmoil by converting selected text into lyrics for original music.

Alex Loveless: Composer
Alex studied at London College of Music, University of West London, RADA & Birkbeck, University of London. He has written and composed a number of works for theatre including adaptations of Kazuo Ishiguro’s Booker award-winning The Remains of the Day (Evening Standard’s Critics’ Choice / Time Out’s Best Theatre This Month September 2010) and Thomas Hardy’s Tess of the D’Urbervilles. Alex’s work has been performed around the world at venues including Theatre Royal Drury Lane, Duchess Theatre, Royal Academy of Music, and on BBC Radio 4. He is the recipient of two Arts Council England composers’ bursaries, a Vivian Ellis Prize for most promising newcomer, the Howard Goodall Award for composition, and is a professional writer associate of and reader for Mercury Musical Developments. Alex’s work is published by Samuel French Ltd, Palgrave Macmillan and London College of Music. Alex has taught, and given workshops and master classes at a number of universities and conservatoires. He wrote and leads the BA Acting, Writing and Directing degree course at London College of Music.

Scott Howland: Composer
Scott began acting at an early age, inspiring him to become a member of the National Youth Theatre at 17 and perform in several shows at the Laban Theatre in Greenwich. He trained in contemporary, street and breakdance at Dancecity in Newcastle, as well as having a grade 8 singing qualification and playing grade 6 guitar and drums. After training in performing arts at Durham College and then in Manchester, Scott completed a masters at RADA where he studied writing as well as acting and composed an original song for Benedick in 2017 when he was the first actor to take on the role in this adaptation of Much Ado About Not(h)ing. Since then, Scott has written and starred in his own play, Nothing to Perform, which earned 5 stars at the 2017 Camden Fringe Festival. MEIWES/BRANDES, his second self-written/performed piece, premiered at the Tristan Bates Theatre in early 2018 as part of their inaugural John Thaw Initiative. Scott was also a member of the touring ensemble of Antic Disposition’s Henry V at the end of 2018, playing the roles of Nym, Westmoreland and Williams. His third play, Play 2, was performed for the first time in August 2018 at The Cockpit after a week of research and development, and it will be presented at The Actor’s Centre on February 8-9.