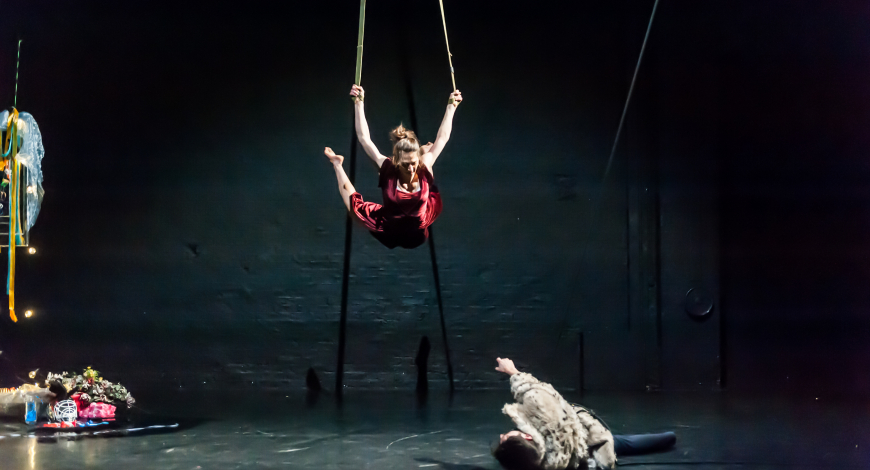 Produced and presented by Out Of Order

The world has come to an end. Civilisation as we know it has ceased to exist. In the absence of an ever-present society, the last two people left on Earth turn to imagination and resilience to start from scratch. Having no one but themselves, their new reality takes on unexpected guises: humorous situations, desperate isolation and inventive past-times are all to take on the non-stage.
Elaborate headpieces, human puppetry, experimental mating rituals and aerial acts interplay with innovative pair work as they explore their counterweighting relationship. In this universe you can shoot from a banana, species meld, men have babies and cannibalism is funny. Challenging the presence of the audience, the performers follow their personal needs and dance like no one is watching.
Once Standing is a post-apocalyptic tale told through physical theatre, contemporary circus and dance. The characters’ relationship is both playful and abusive, their emotions shift quickly through boredom to recklessness and their behaviour seems quirky, dark, hilarious and unexpected, taking us deep into questioning identity controversies: How do we learn things and become who we are? How are we shaped by socio-political circumstances, geographical location, traditions, religion, gender and parental influences? What would happen if some or all of these elements were missing? How do we integrate information and form different parts of our personality? How do we evolve as individuals, as a species, and what is the need – if any – for others? If there was no one left to tell us what to do and how to behave, anything could be possible. Who would we then become?
Get ready to be excited, moved, confused, to relate to the despair and freedom that aloneness can bring, and to recognise yourself in the skin of an alien.