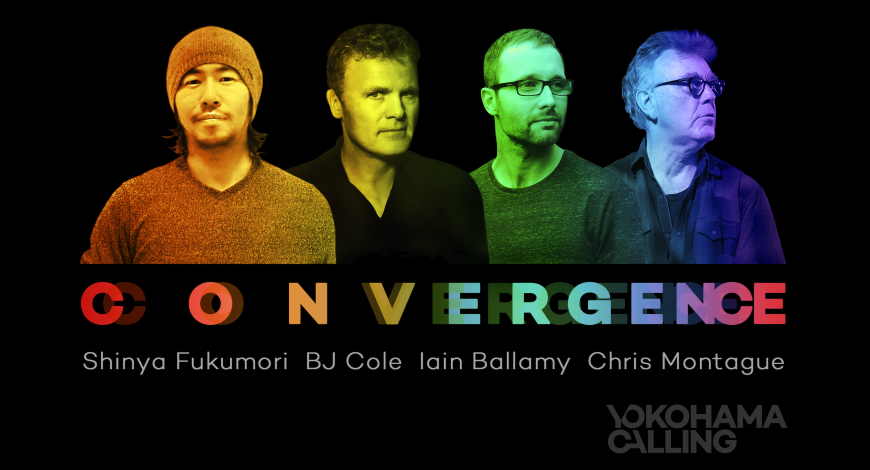 Produced and presented by Yokohama Calling

For one performance only, four exceptional musicians come together for a unique musical collaboration. Each bring their compositional language to a point of convergence from which new interpretations of songs emerge. The uncommon format of pedal steel guitar, saxophone, electric guitar and drums promise soundscapes that will inspire and surprise.

The programme will feature compositions by all four musicians. Yokohama Calling are very excited to be facilitating this unique meeting of musical talent and the possibilities it will bring.

Shinya Fukumori is a composer / drummer and ECM recording artist. Shinya is known for his melodic and rhythmic approach with a wide range of dynamics to drum-set playing and unique and sensitive cymbal work, which creates a very distinctive sound. Shinya's attention to timbre, detail and space is also reflected in the colour-fields of his free-floating ballads.

BJ Cole is nothing short of a legend of pedal steel guitar. Whether co-writing with the Orb, re-interpreting Roy Orbison with Brian Eno or creating a context for the pedal steel in folk music with Martin Simpson, BJ Cole continues to prove himself the most essential and pioneering pedal steel guitarist in the UK today. BJ has worked with artists as diverse as David Sylvian, Elton John, Marc Bolan, Scott Walker, The Stranglers, Depeche Mode, Beck, Bjork, Sting, John Cale and Tom Jones, earning himself considerable respect as both an innovative and exciting creative force.
"Best Pedal Steel player in the World I'd say .." – Sting

Chris Montague is one of the most innovative guitarists and musicians to emerge from the UK in recent years, Chris Montague is widely recognised for his skills as a composer and performer. As a composer Chris has received several commissions, including: Royal Academy of Music Big Band, Threads Orchestra, EFG London Jazz Festival and several large guitar ensemble pieces for Hull and London Jazz Festivals. Some of the musicians and bands Chris has worked with have included; Troyka, Squarepusher, Benny Greb’s Moving Parts, Janek Gwizdala, Monocled Man, Django Bates, Colin Town’s Blue Touch Paper, Nick Smart’s Trogon, Trish Clowe’s Tangent.

Yokohama Calling is a UK based operation working with Japanese artists to promote Japanese music and culture outside of Japan. The vision is to bring UK and Japanese artists together - to foster the spirit of collaboration, to create new bonds and make great music.

“Fukumori is among the most poetic of drummers, his light touch lending only the necessary textures and rhythms: reminiscent of the late, great drummer Paul Motian, a frequent contributor to ECM recordings.”
Mark Sullivan, allaboutjazz.com

“Intensly melodic, eventful and full of surprises... The beauty of tone that Iain Ballamy gets is certainly one of the joys of the current scene, and his concern with creating it echoes Stan Getz’s.”
Andy Hamilton, Jazz on CD