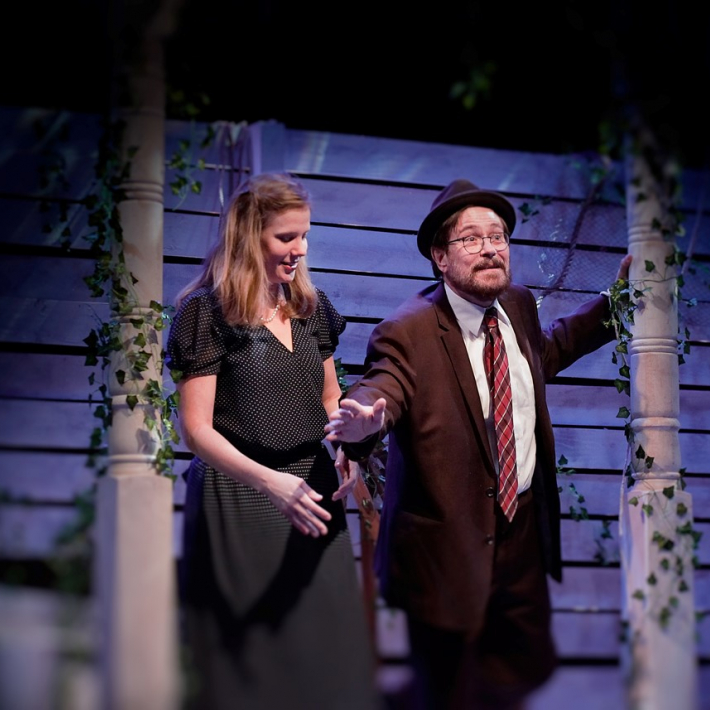 Produced and presented by The Cockpit and Burning Coal Theatre Company

Lanford Wilson's beautiful and funny Pulitzer Prize winning 1980 play introduces us to Matt Friedman and Sally Talley, who come together, for better or for worse, in a gazebo on a river bank in Missouri in 1944.

The New York Times called the play "... a valentine to a classic romantic ideal: two lost souls finding in each other a respite from loneliness."

Lanford Wilson was one of the seminal figures of the 1960s New York City Off-Broadway movement.  He helped found the legendary Circle Repertory Company in the West Village, a company that would produce such extraordinary actors as Christopher Reeve, Jeff Daniels, William Hurt, Swoozie Kurtz, Cynthia Nixon and Richard Thomas.  Among the many playwrights that got their start or found solid footing in the New York theatre were Jon Robin Baitz, Marsha Norman and Craig Lucas.

Talley's Folly is part of a trilogy of plays that include Fifth of July, set 31 years later on the same Missouri estate as Talley's Folly and Talley & Son.  Wilson had planned to write as many as nine plays about the Talley's of Lebanon, Missouri prior to his untimely death in 2011 at the age of 74.  The original production of Talley's Folly played on Broadway and starred Judd Hirsh and Trish Hawkins.  Its only other London production, in 1983, was presented at the Lyric Hammersmith and starred Haley Mills and Jonathan Pryce.

The production is directed by John Gulley, a professor of theatre studies at the University of North Carolina at Greensboro.  John has previously worked with Horton Foote, Ellen Burstyn and other American theatre icons.

NOTE:  Following select performances, there will be an audience talkback with a guest artist or scholar (names and dates TBD).  The talkback is part of the ticket price.  We encourage all audience members to grab a drink at the bar and come back in for a chat about Lanford Wilson, Talley's Folly, and the extraordinary New York City Off-Broadway Theatre Scene that Wilson and his Circle Repertory Company helped forge into existence in the late 1960s.

Thursday 13 to Saturday 29 October 2022
Shows on Thursdays to Sundays.