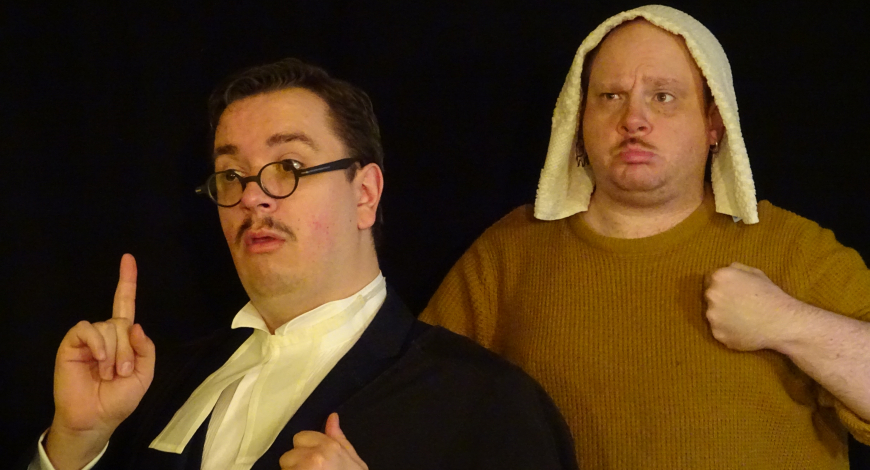 A murderer & a barrister. Both unsuccessful

tickets/dates
The Dock Brief by John Mortimer
produced by David Tudor Productions and presented by The Cockpit.
We are very sorry to have to suspend Dock Brief.
The run will now finish on Saturday 21st.
Forthcoming shows in this run will be rescheduled in due course.

All ticket holders will be automatically refunded in full.

If you had tickets booked you should receive an email from us regarding your refund. Please check your email including your junk/spam folder.

John Mortimer's hilarious comedy concerning an encounter, in a prison cell, between an unsuccessful murderer and an even more unsuccessful barrister.

A brilliant legal satire which was the forerunner of Rumpole of the Bailey featuring Kingsley Glover and Matthew Vernon.

Kingsley Glover  -  Fresh from working at LaplandUK and portraying William Shakespeare in Stratford-upon-Avon Kingsley returns to the London stage.

Matthew Vernon  -  For the past 3 years Matthew has worked closely with a fledgling professional company working on new texts and now makes a welcome return to the London stage.

Director David Tudor qualified as a Drama Teacher in 1972 at Reading University and has worked as a professional director, producer and actor for 46 years. He has 9 years experience as an Artistic Director in Repertory Theatre and for six years was Artistic Director at The Kings Theatre, Southsea.  In the West End he has directed and produced at The Arts Theatre and has also produced at The Vaudeville, The Albery, The Criterion, The Apollo and The Playhouse.  He has directed many tours visiting most of the country's theatres and has also Guest Directed at several London Drama Colleges.

John Mortimer's first play was The Dock Brief and was the forerunner of his highly successful television series Rumpole of the Bailey.  As a revered barrister John Mortimer drew on his own experiences to create a humorous insight into the workings of the law.

Shows running Tuesdays to Saturdays  from 17th to 28th March 2020 at 9pm
Plus matinees on Fridays 20th and 27th March at 4pm.  To book for the matinees please quote code 241brief