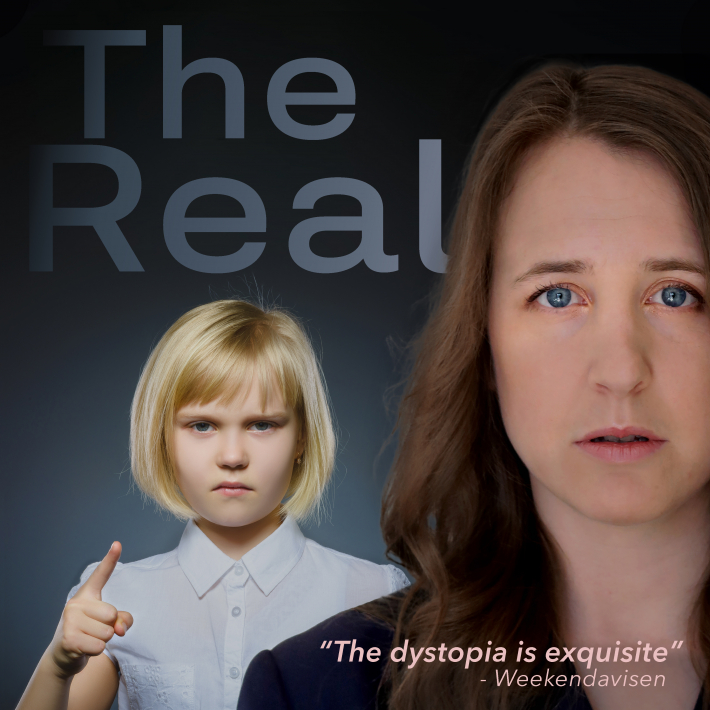 Produced by Linnea Langfjord Kristensen
Presented by The Cockpit

"This is not a simple critique of capitalism, but a complex charisma critique - and the play is propelled by real pain, finely polished characters, and lines, flexibly weaving themselves through clever, quick sprints", Weekendavisen, 2021.


Why can’t Drew remember anything or keep a straight thought for longer periods of time, and instead have resorted to folding cabbages from paper? Why won’t Henriette eat? Everyone always told Tom that he was destined to become a famous writer, so does it matter that the stories he writes harm the people around him? The mother Meg yearns to become independent, but what exactly happened to her daughter and why is she never there? Always watching and dictating is the Child, forcing everyone to keep busy, reach their full potential and strive to be real people – Otherwise they will be punished.

Set in a heightened version of today’s world, The Real is a tragicomic story about four people who try to understand what it means to be real when their own reality itself is a representation. When their dreams, desires, constant self-improvement, and even choices are hardwired into them by an overly friendly, Big Brother like society.

"In Linnea Langfjord's production the dystopia is exquisite. (…) It is all about being successful, reaching your full potential, personal achievements and to be a real and authentic human being in a dark, quantifiable way. To become real in the middle of an unreal, tensely smiling society. (…)
Drew has purposely lost his memory and ability to think coherently and instead folds cabbages from paper. Henriette meets the world with an angry, queen-like demeanour and tries to avoid the fines which a friendly, Big Brother like society issues to Citizens who are not busy enough improving themselves. This is not a simple critique of capitalism, but a complex charisma critique - and the play is propelled by real pain, finely polished characters, and lines, flexibly weaving themselves through clever, quick sprints. There is a young, contemporary Tony Kushner to Linnea Langfjord, who effortlessly mixes intellectualism, tragi-comic social analysis, intimate social life, and disturbing realism in a bright, well laid out doomsday story".