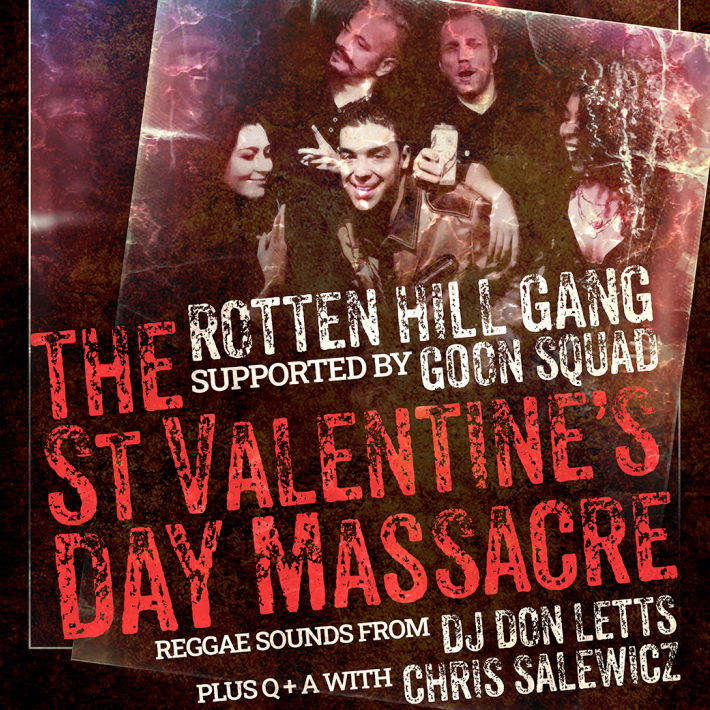 This event is part of:
Mosh Pit At The Cockpit
Produced and presented The Cockpit

This Valentines forget the chocolates and flowers and dive deep into the night of love with your hosts Don Letts and The Rotten Hill Gang.

Filmmaker, musician, DJ, broadcaster, social commentator, husband and father – Don has always defied conformity. A British-born son of Windrush parents, he seamlessly pivoted between London's punk and reggae scenes earning his reputation as the 'Rebel Dread'.
​
In There and Black Again, Don looks back on his exceptional life, which has seen him befriend Bob Marley after sneaking into his hotel, join The Clash's White Riot tour as manager of The Slits, become one of the UK's most highly regarded video directors just as the MTV boom hit, win awards and plaudits as a movie director, win a Grammy for documentary work, tour the world as a rock star in Big Audio Dynamite and then a live DJ, before becoming a renowned BBC radio DJ and educator on all things cultural.
​
Told in part as scenes from a movie shot on location in London, Kingston, New York City, Los Angeles, Windhoek, Salt Lake City and Goldeneye, There and Black Again co-stars a cast of hundreds, including Joe Strummer, John Lydon, Bob Marley, Chrissie Hynde, Chris Blackwell, Paul McCartney, Nelson Mandela, Keith Richards, Patti Smith, Chuck D., Malcolm McLaren and Vivienne Westwood.
​
With reflections on the Black Lives Matter movement and the highs and lows of personal relationships, this impactful book includes moments of civil unrest, live music, humour and political struggle. There and Black Again is the often unexpected story of a man who has never been afraid to tread his own path.

Don will be reading from his book and DJ'ing a set with a set that’s very much in the spirit of his days at The Roxy – we’re talking the history and legacy of Jamaican music – with an emphasis on moving the crowd.
Donletts.com

The Rotten Hill Gang - Seamlessly cobbled together by Bass Master General Gary McPherson (Big Audio Dynamite 11) and frontman Reds Kin, who consistently believed in their vision to create meaningful music to impact our take on life; making some sort of difference on how we think, feel and respond to a topsy turvy world. And then with his solid partner in crime for over ten years (friends for 30), Gary and Mal (drummer Transvision Vamp) have nurtured a relationship that synergises incredible influences, related yet different, but inviting and making happen an exciting flow of special music; through mutual respect and understanding of what makes them both want to keep doing this, and a connection drawn from their musical experiences and individual journeys, there is a passion to produce great music that makes a positive change.

The Rottens' music is fun, cheeky, irresistible, questioning and beautifully cinematic; also encompassing a constant layer of reflection, insightfulness, thoughtfulness, consideration and drive that’s not afraid to challenge society. Rotten Hill Gang has a catalogue of timeless stories that thread through their unique sound; comparable to the likes of Shakespeare and Noam Chomsky.

We hope you love what we do…

“I love everything about ‘Rotten Hill Gang’. I love the sound, which is blindingly modern whilst harking back to first generation  hip-hop, dislocated funk and the sound of the Language Lab. I love the Artful Dodger look. I love the endless new venues they find to play. I love the stream of gorgeous singers they unearth. I love what they stand for.”

* Exact line up of The Rotten Hill Gang yet to be confirmed.

Support provided by Goon Squad a fast loud garage rock and roll trio made up of an Oxford punk, a London mod and Serbian rocker. Playing a furious mixture of 60's garage nuggets and the late 70's tracks inspired them, they also drop in a few home grown classics to keep it fresh. Think Link Wray, early KInks/Who, Wire/ATV and Johnny Thunders.

"Goon Squad - This trio were a late addition to the bill and I am glad that they did play their covers set as they certainly picked some obscure gems. They started with a warm-up instrumental and then launched into the Gang Of Four's 'Damaged Goods', 'Brand New Cadillac' (a 1959 Vince Taylor original hit made famous by The Clash), 'Outdoor Miner' by Wire, Johnny Thunders & The Heartbreakers 'One Track Mind', 'Bankrobber' by The Clash, 'A Bomb In Wardour Street' by The Jam, 'In A Rut' by The Ruts, '/ Can't Explain' by The Who, and finished with '(I'm Not Your) Steppin' Stone' made famous by The Sex Pistols and The Monkees."